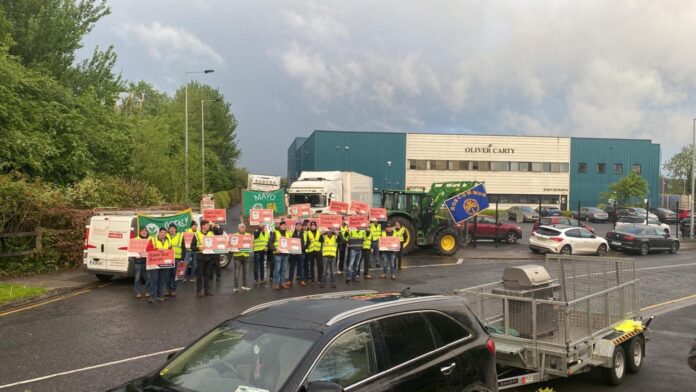 Pig farmers are reporting a positive outcome to protests held at four locations this week including the Oakpark processing facility in Cahir. Commitments were made by the processors of loyalty to Irish product and that increases would not be resisted.  The IFA  quotes the cost of feed for pigs at approximately €1.69 / kg according to Teagasc and saythere are farmers with considerably higher feed costs. IFA says farmers simply cannot continue to produce pigs at such grave losses and must have their margins recovered.  A protest last week at Carrolls of Tullamore secured a commitment from Carroll’s to do everything they can to ensure their suppliers farmers get €2/kg by the 1st of June.  Irish pig price was unchanged this week with farmers receiving quotes of €1.66c/kg up to 1.76c/kg. The farmers hope to  motivate meat factories, secondary processors and retailers to increase the price paid to try to improve the margins for pig farmers at present with each pig losing approximately 50 euros.