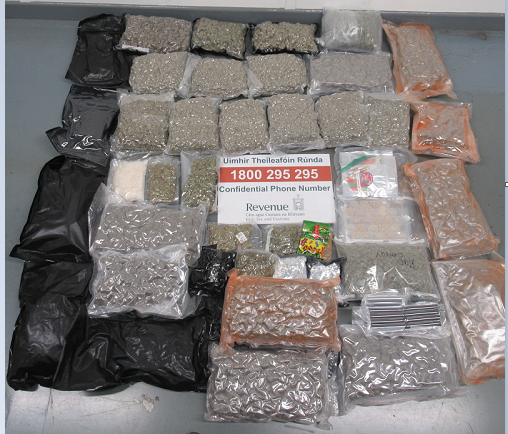 Revenue have seized illegal drugs worth over €330,000, some of which was heading to Co. Tipperary.

The officers examined parcels at two premises in Dublin where 15.5kgs of herbal cannabis and 5,528 Zopiclone tablets were discovered.

The concealed in parcels which were labelled as ‘tea’, ‘Christmas gifts’, ‘coffee beans’, ‘textiles’ and ‘food stuffs’ originated from the US, Canada, Spain, the UK and the Netherlands.

The illegal drugs were found with the assistance of detector dogs Bailey and Sam and were were destined for addresses in Counties Dublin, Louth, Kildare, Cork, Kerry, and Wexford also.

These seizures are part of Revenue’s ongoing operations targeting the importation of illegal drugs.

If businesses or members of the public have any information regarding smuggling, they can contact Revenue in confidence on Confidential Phone Number 1800 295 295.

INMO Calls For Non-Emergency Activity To Be Curtailed

Tipp Town Gardaí Appeal For Witnesses To A Fatal Collision