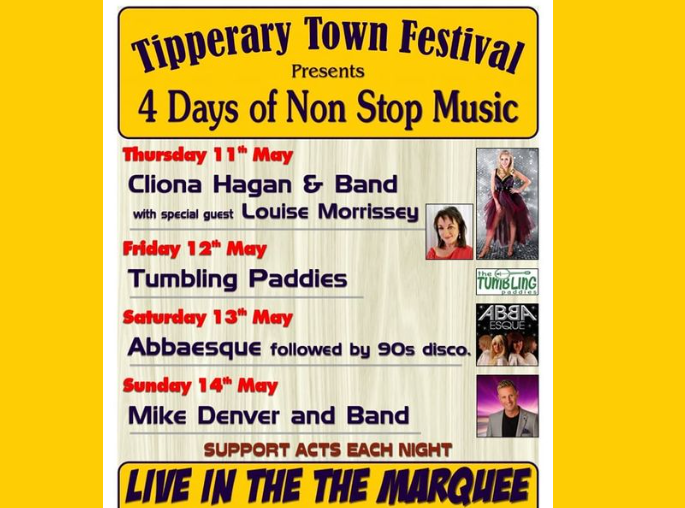 Tipperary Town Festival is set to go ahead in May this year.

The festival is planned to run during the week ending May 14th and will feature 4 nights of live music in a marquee to be set up in the Lidl Carpark at Bank Place.

The festival details are being finalised but family and child friendly events will also be included at various locations around the town.

The organising of the event is led by Festival Committee Chair Eamon Ryan and includes promoter John O’Brien and extensive support is expected from the Tipperary Vintage Rally Group led by Jack Leonard.

Louise Morrissey is to open the music events starting on May 11th which features dancing by Cliona Hagan, the Tumbling Paddies are the main performers on May 12th, followed by Abbaesque, an Abba Tribute band and a 90s Disco on May 13th before the concluding with dancing by Mike Denver on the 14th of May.

The festival has not been held since 2018 and the committee hope that it will bring increased footfall to the town and provide a tourism spin off.

The marquee will offer a floor for dancing, bars and some seating.

Tickets are now on sale via Eventbrite and full details of the Festival as it develops will be shared on The Tipperary Festival Facebook page.

The organisers have set a goal of delivering the biggest festival ever seen in Tipperary town.