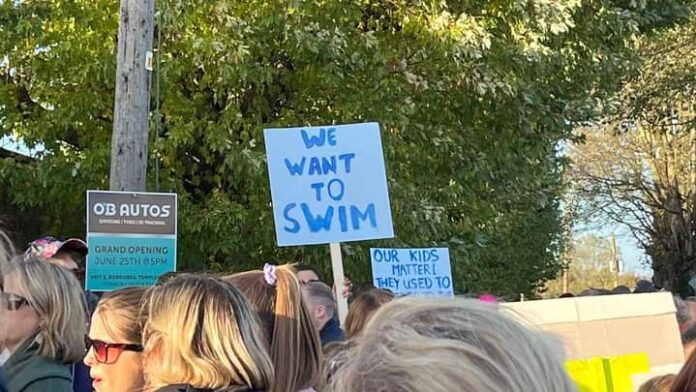 A huge crowd gathered in Templemore as part of their campaign to gain access to the swimming pool in the Garda Training College.

Since 1965 the community have had access to the facility as schools and community members organised swimming classes.

The facility was closed during the pandemic and the public access has not been restored since then as there appeared to be some confusion on the part of College Management as to how the OPW Licensing system operated.

The Office of Public Works owns the facility. The situation has worsened with Garda College Management said to have now decided to keep the pool closed as an energy saving measure.

Campaigners say this could lead to higher costs in the future as facilities such as swimming pools can deteriorate if not in use.

The protest was held yesterday afternoon under the banner “We Just Want to Swim — Templemore”.

Leaders of the campaign point out that the community has always facilitated and supported the College by for example providing accommodation for Garda Recruits and say a closure of the pool will damage relations.

In addition, the community has lost GP and bank services in recent years and wants to retain the swimming pool especially as the town has recently launched it’s Sustainable Energy Community Plan with high hopes that the Garda College would be a key partner in using renewable energy.

Some 800 children in the hinterland of Templemore have indicated a desire for swimming lessons in recent weeks and the community points to the provision of swimming lessons as a key reason for a lack of water safety incidents in the area.

Thurles and Roscrea Public pools are both oversubscribed for their swimming classes.

“We Just Want to Swim Templemore “ also says the decision flies in the face of Government policy to allow every child the opportunity to learn how to swim.

Full details of the campaign can be found on their social media accounts at “We Just Want to Swim Templemore“.