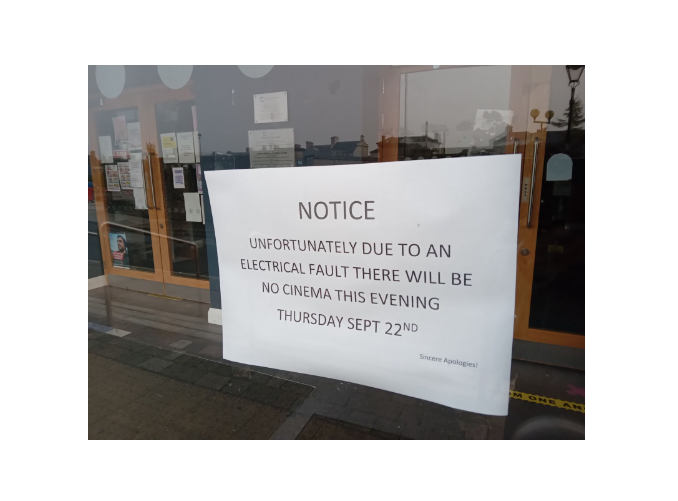 There were no cinema services at the Excel Theatre in Tipperary town last night.

An electrical fault yesterday afternoon had prompted an evacuation of the building.

It is understood that a light fixture malfunctioned and smoke and flames were emitted.

Two units of Tipperary Fire service responded and staff from the  ESB.  A notice posted on the Excel Facebook Page read “Due to an electrical fault this afternoon and for the safety of our Patrons & staff we followed procedures, evacuated the building and alerted the fire brigade!

We will remain closed for this evening and will update you tomorrow morning.”

There were no injuries or damages caused during the event.

The venue has an extensive programme  of events planned for today as part of Culture night  – beginning at 2pm with a screening of a film about the history of the Glove industry in the town. There will also be a film screening at 7.30pm when “Tipperary, at the heart of the Revolution  1910 – 1923” will be premiered. There is also a musical performance planned by the Croker Sisters at 8pm and the regular cinema programme. The Library is also due to host 4 events this evening as part of Culture night. The Excel can be contacted on 062 80520. It is not thought that there will be any disruption  to today’s events.  The building also houses the Tipperary Library and the French Quarter Café.