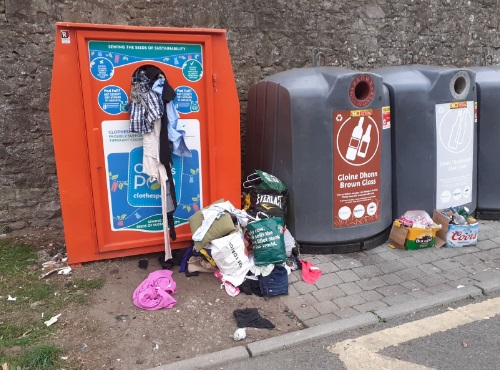 Tipperary Tidy Towns Group has thanked Tesco for a donation of €431.04 as part of the Blue Token Scheme.

Each month Tesco customers are asked to indicate their preferred beneficiary from 3 options presented in the store.

The donation was accepted by Christina Garani on behalf of Tipperary Tidy Towns Group.

The group is active in ongoing cleaning, weeding and litter patrols in Tipperary Town and recently contributed to an improved result for Tipperary Town in the IBAL survey.

Some incidents have caused frustration to the group such as vandalism to flower beds and the misuse of the bring bank areas.

In recent weeks clothing and bottles have been brought to the bring bank on James Street but not actually deposited into the bins.

The President has signed the Circular Economy Act and in the coming months a new code of practice for councils to govern the use of CCTV or other recording devices is to be rolled out to enable prosecutions for illegal dumping.

To date this was not an option due to GDPR rules.