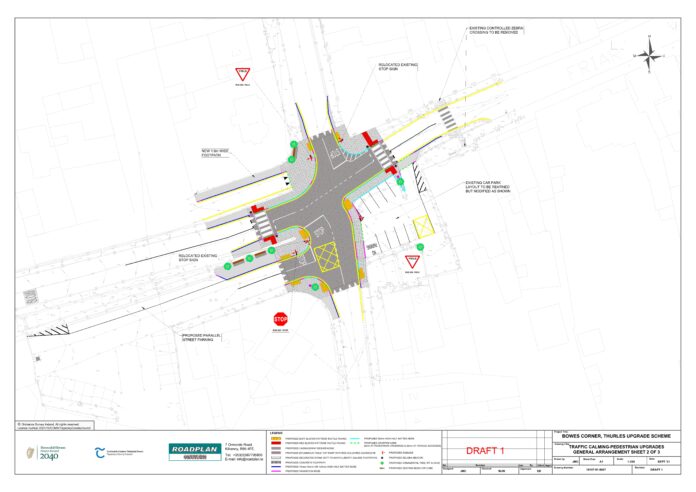 Tipperary County Council has released details of works to be completed at Bowe’s Corner in Thurles.

The council hopes the works can begin in mid July.

The work is funded via €500,000 received under the Active Travel Programme.

The paving materials used  will be  the same as those used in the Liberty Square enhancement.

There has been a delay of over 3 months in the materials being procured – thought to be sourced in China.

The junction handles the intersection of 6 roadways and has seen several accidents over the years leading to many calls for a roundabout at the location.

The existing pedestrian crossing near The Green Sheep coffee shop will be removed.

Parallel parking on Railway Road and modifications to parking beside Bowes are also proposed.

There will also be some “junction tightening” on the other side of the bridge on Abbey Road in respect of the entrance to the Railway Station.

Included below is an image of a proposal for a roundabout at Bowe’s corner from 2005 by then Councillor Noel O’Dwyer.  Thurles MD are also currently conducting a survey to enable the development of a Local Area Transport Plan – the survey closes on June 24th and can be found here.