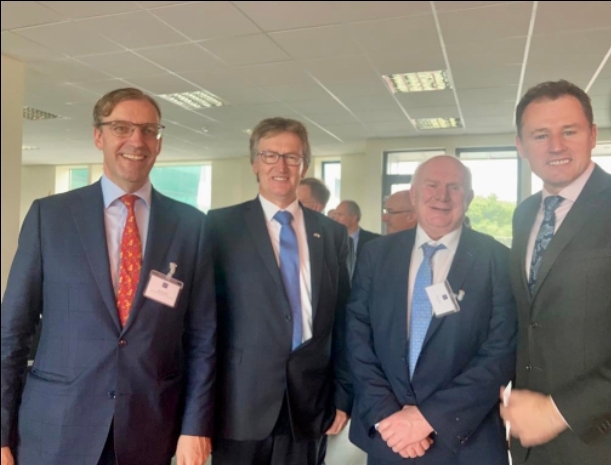 The Cathaoirleach of the Oireachtas Agriculture Committee, Tipperary TD Jackie Cahill today attended the turning of the sod at the site of the new Glanbia cheese plant, located in Belview, Co Kilkenny.  The Minister for Agriculture,  Charlie McConalogue  also attended alongside the  Ambassador of the Kingdom of the Netherlands to Ireland, Adriaan Palm.

The new production facility  is a joint venture between Glanbia and the Dutch company Royal A-ware and is understood to have a construction cost of €140 million. The project has been delayed due to objections from An Taisce due to the environmental impacts of producing milk for the plant.

The Belview plant will manufacture continental cheese – allowing for diversification away for producing cheddar for the UK market which is now not as attractive due to Brexit. Glanbia processes milk from over 4000 farms mostly in the South east of the country.  Deputy Cahill described the turning of the sod as a good day for rural Ireland,  the rural economy,  exports and  farming families across the region.