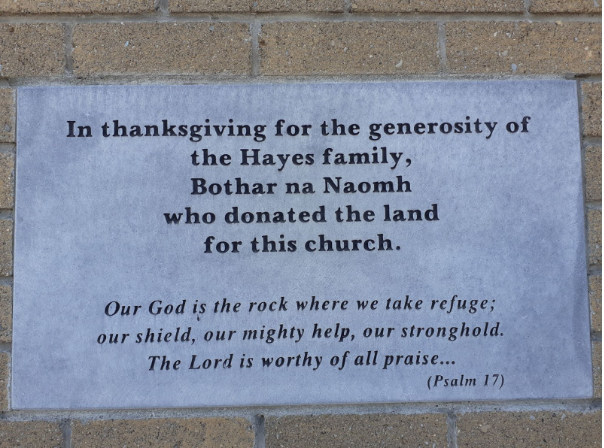 The Church was officially blessed on  6th of October 1971 by the then Archbishop Dr Thomas Morris.

A special Mass will be celebrated on Friday June 10th at 7pm to mark the Jubilee.

This Mass will be concelebrated by Dr Kieran O’Reilly, Archbishop of Cashel and Emly and Bishop of Kilmore, Martin Hayes, former Administrator of the Thurles Parish.

In addition a special marquee has been erected on the church grounds for refreshments and a social event to mark the occasion.

Two special murals by local artist David McElgunn have been added to the Church façade to mark the Golden Jubilee.

A Book detailing the history of the Church and a commemorative CD featuring the cantors of Bothar na Naomh have also been created to mark the Jubilee.

These are now on sale at the parish office on Cathedral Street, Bookworm Thurles and Eason’s Thurles and will also be available at Friday’s events.

The church was originally intended for Stradavoher, Thurles with a site purchased in 1963-64.

The Cathedral of the Assumption was unable to cope with attendances even with 6 masses.

At the time the interval between the masses was shortened to one hour which served to cause traffic chaos.  A population study in 1971, council housing development in the area and an offer of a free site on Bothar na Naomh led to the decision to build the church in the shadow of Semple Stadium.

The contract price was just short of £100,000 for the church and adjoining Presbytery.