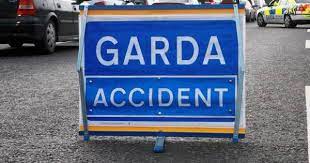 Gardaí are appealing for witnesses following a serious road traffic collision that occurred on the M8 at Brackbawn, Kilbehenny in Co.Limerick at approximately 3.10pm yesterday.

On Monday, 4th October, Gardaí and emergency services attended the scene of a collision which involved a car and a male pedestrian. The pedestrian, aged in his 30s , was later airlifted to Cork University Hospital where his condition is currently described as critical. The driver of the vehicle was uninjured.

An examination of the scene was conducted by Garda Forensic Collision Investigators and the road has since reopened.  Gardaí are appealing to anyone who may have witnessed this collision to come forward to them. In particular, any road users who were travelling in this area and who may have camera footage are asked to make it available to Gardaí.