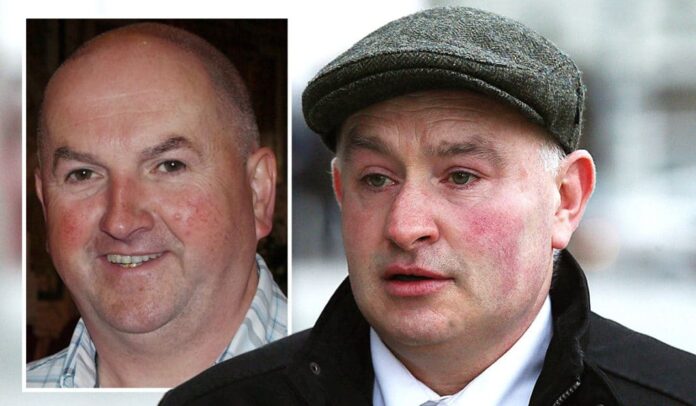 Farmer Patrick Quirke (Image: Right), who was was convicted of killing DJ Bobby Ryan (Image: Left) in 2011, watched his mother’s funeral from prison as she was laid to rest last Friday in Tipperary.

Quirke, of Breanshamore, Co Tipperary, was convicted in May 2019 of the murder of Mr Ryan, also known as Mr Moonlight.

His mother Eileen, who was in her late 80s, passed away earlier this week. It is understood Quirke, who was entitled to apply for temporary release from Portlaoise prison on compassionate grounds, wanted to avoid publicity over his attendance. Instead, he viewed the service online.

Eileen Quirke’s funeral took place in St Michael’s Church, Tipperary,  and was attended by a small gathering of close family members and friends.

Mrs Quirke famously contacted RTÉ radio’s Liveline programme in 2005 to advise people to get independent legal advice when transferring land or a business.

In the call, which was rebroadcast after her son’s conviction, Mrs Quirke said she was upset because her son had “got possession” of the family home after her husband of 40 years had died.

Prior to his death, her husband had transferred the family farm to his son Patrick. She told Joe Duffy that when she raised her grievances over the house “he said ‘no way, just no way’ and I mean if you have money Joe you can pursue it.

“I didn’t have money, I couldn’t keep going to solicitors, so what can you do?” She said her other children were “devastated” about this.

Patrick Quirke is serving a life sentence after a jury found him guilty of murder on a ten-to- two majority verdict.

He is awaiting the result of an appeal, heard last October.

Plans Scrapped To Build Bridge From Northern Ireland To Scotland

85% of Tipperary Business Owners Support N24 Traffic Being Diverted Around...